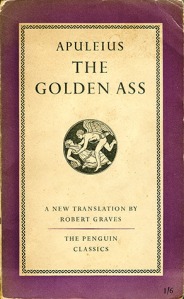 The Golden Ass is, to put it simply, the adventures of a man transformed into
a donkey. Written by Lucius Apuleius in the 2nd century AD, it is one of my favourite books to have survived from ancient Rome. This was my second time reading it.

I read the 1976 Penguin Classics reprint of the 1950 translation by Robert Graves. Graves was a brilliant scholar who was extremely knowledgeable about ancient Greece and Rome – his compendium on the Greek myths is second to none – so i’m confident that he did a good job on the translation.

The protagonist (who has the same name as the author) undergoes his transformation as a result of his foolish curiosity about witchcraft, and then has a pretty rough time of it until divine intervention restores him to his original form. It seems to me that Lucius’ physical state is mirrored by that of his soul. He begins the story as a thoughtless, womanizing glutton. He basically acts like an ass, and so is transformed into one. Tiring of the constant danger, abuse at the hands of cruel owners, near death experiences, and other shameful circumstances, he finally gives himself up to prayer and is rescued by the Goddess Isis. She allows him to be changed back, and he puts his former ways behind him. He is initiated into the mysteries of Isis and Osiris and lives happily as a lawyer for the rest of his life.

I was really able to sympathize with the last few chapters, where Lucius undergoes his conversion. Although the book is a humorous fantasy, the overall theme is a moral and religious one. One of my favorite parts in the whole book is when he sees Isis emerging from the ocean. The Goddess says to him – “I have come in pity of your plight, I have come to favour and aid you. Weep no more, lament no longer, for the hour of your deliverance, shone over by my watchful light, is at hand.” While I converted to Christianity instead of the Isis cult, many of the feelings I had were similar to the ones described by Lucius.

The book is often absolutely hilarious – I actually laughed out loud several times – even though a lot of the humor is very crude. It rolls along at a good pace and is a fairly easy read. There are many side stories, including a lengthy interlude in the middle of the book which describes the story of Cupid and Psyche. They are integrated seamlessly into the main narrative and everything flows together really well. It must be said that there is a lot of violence, death, and insults to various types of people, but I don’t think they detract from the story.

I would highly recommend The Golden Ass to anyone looking for a funny, exciting story. Apuleius’ own introduction says it best: “If you are not put off by the Egyptian story-telling convention that allows humans to be changed into animals and, after various adventures, restored to their proper shapes, you should be amused by this queer novel… now read on and enjoy yourself!”

This review was written by Brent Laroche, who has been a guest author here at Book Musings once before. Check out his first contribution here.

One thought on “The Golden Ass Review”