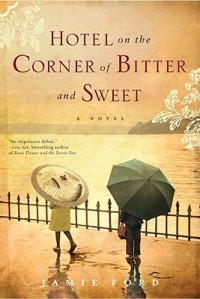 Since Rebecca at Love at First Book posted about her plans to give copies of Jamie Ford’s Hotel on the Corner of Bitter and Sweet out during World Book Night, I’ve wanted to read this book!  I very much enjoyed reading this book, and it opened my eyes to various ideas and issues that I had not taken the time to consider before.

Hotel on the Corner of Bitter and Sweet is a story about love, and love lost. A love that is deep, loyal and true. A love that is intense. Maybe two intense for such young people to handle.

It is also one look at the upheaval and devastation caused by the evacuation of all people of Japanese heritage living in America, whether immigrants or Americans.

What exactly happened to Japanese people in America after the attack on Pearl Harbour in 1941? In my mind, I also made the jump over to, how did America behave differently or similarly, or better, after the 9/11 attacks in New York?

Retaliation shall remain outside the realm of this discussion on both of these situations.

Can you imagine removing the entire population of an ethnic group from a country as vast and populated as the United States? I don’t know how they did it. It must have taken a huge amount of coordination and man-power to evacuate, transport and care for (if you can call it that), the Japanese people at that time. There were over 120,000 of them and there were camps all over the country, you can see a map here. I won’t even get into the ethical issues here, but sufficed to say that it is a very sad, sad part of history. A part that I feel I should learn more about.

And do we learn from history? Maybe…. sometimes? While Muslim people in the States weren’t rounded up after September 11, 2001, they were, and are, certainly openly profiled, discriminated against and treated as suspect by various government related agencies (such as border patrol), organizations, and individuals.

A study completed in 2012 entitled Attitudes Towards Muslim Americans Post-9/11 cited at 1700% increase in hate crimes in the aftermath of the attacks. However, the study also concludes that over time there is not a significant rise in overall negative attitudes towards American Muslims. So, it appears that as time passes, things have returned to pre-attack levels. I am not if in practice this is true, but I have limited experience, which is mostly regularly trying to cross the Canadian border to the US with Middle Eastern friends in tow, versus crossing with only caucasians.

We have a much greater benefit of time when we look at the impacts of the response towards the Japanese Americans in the 1940s though, and overall we can see that there is no longer the fear and mistrust that there once was. Even in the book’s later timeline of 1986, this attitude is no longer expected or prevalent in society.

What will happen next time a similar situation descends upon us? Because unfortunately there will always be a next time…

7 thoughts on “Did we learn anything? Hotel On The Corner of Bitter and Sweet”